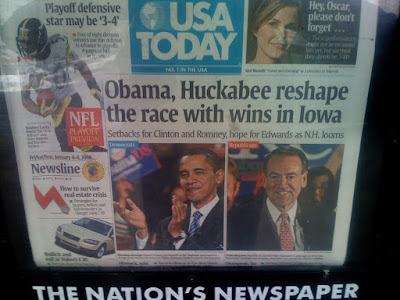 Success. Mike Huckabee has written Do the Right Thing, From Hope to Higher Ground , and many other books. His sincerity, humor, and authenticity allowed him to win the state of Iowa during his campaign to be the Republican nominee for presidentas seen in this photo of the USA Today front page news from 4 January 2008. Mike Huckabee has a social/political action website (HuckPac.com) and an informational site about his life and leadership (MikeHuckabee.com).

Personal Encounter. Gregory Johnson has a journal entry from his meeting with Mike Huckabee on 23 July 2007.

Health. “Huckabee’s efforts to improve his own health have received national attention. Diagnosed with Type II diabetes in 2003, he lost 110 pounds. Barely two years later, he has completed four marathons: The 2005 and 2006 Little Rock Marathons, the Marine Corps Marathon and the ING New York City Marathon. As a result of his accomplishments, The Road Runners Club of America named him its ‘Southern Region Runner of the Year’ and USA Track & Field has named him their ‘Athlete of the Week’ for the country.” [ source | video ]

Music. “Huckabee, 52, enjoys playing bass guitar in his rock-n-roll band, Capitol Offense, which has opened for artists such as Willie Nelson and the Charlie Daniels Band, and has played the House of Blues in New Orleans, the Red Rocks Amphitheater in Denver, CO and for two presidential inauguration balls.” [ source ]

Videos. Below are links to some videos of Mike Huckabee provided by the Premiere Speakers Bureau.

Do The Right Thing. In this interview with Jon Stewart on the Daily Show, Mike Huckabee talks about his latest book, Do The Right Thing, Inside the Movement That’s Bringing Common Sense Back to America. (20081209tu)

Gay Marriage. In this interview with Jon Stewart on the Daily Show, Mike Huckabee presents the conservative position regarding gay marriage. (20081209tu)

CBS. In this interview on CBS Early Morning, Mike Huckabee talks about the final days of the presidential campaigning. (20081031fr)

Barack Obama. In this interview with Steven Colbert of the Colbert Report, Mike Huckabee talks about Barack Obama as the Democratic nominee for president. (20080827we)

Campaign Update. In this interview with Steven Colbert of the Colbert Report, Mike Huckabee gives an update on his presidential campaign. (20080207we)

Authenticity. In this interview with Steven Colbert of the Colbert Report, Mike Huckabee talks about the importance of authenticity in public service. Steven gives Mike Huckabee the “Colbert Bump.” (20070423mo)

Conservative but not Mad. In a Fox News interview with Chuck Norris and Mike Huckabee, Huckabee states, “I’m a conservative but I’m not mad at anybody over it. I understand that there are other people in the country besides me, and if I’m a president, I’ve got to be the president of everybody – not just the people who think just like me. My goal is going to be to win them over to my point of view on a lot of things, but there still has to be a sense in which we respect each other and we work to solve problems. That’s where we’ve failed. Our government is dysfunctional.”