Summary. As individual citizens, it’s difficult to complete with large corporations for the loyalty of our political representatives. However, by choosing to spend money on ethical products, services, companies, manufacturers, organization, and vendors, you can powerfully determine what kind of world we live in. In the world of investing, this is referred to as Socially Responsible Investing. The same principles apply to our purchasing decisions.

Politicians Listen to corporate donors, but the corporations listen to consumers. Politicians are supported, influenced, and controlled by large businesses, organizations, and institutions. Most candidates are elected because of the funding of a few large donors. Those few large donors eventually control the candidates they help elect. However, most businesses know that they succeed or fail based on how well they respond to customer demands. For this reason, we vote every day with our time and money. What you and others do with available time and money sends a collective democratic message to corporate America. It is through this financial democratic process that the soul of corporate America is programmed, for good or bad. Ultimately, we are the collective soul of the big donors (large corporations, organizations, and institutions). We will determine the elections based on how we have spent our time and money. This is how marketplace democracy works. Organizations like Buyblue.org and WorkingAssets.com are based on this principle. The CaliBamboo.com website inspires people to purchase bamboo and declares, “Cast a vote for a sustainable future,” as a reminder that our dollars equal votes.

Business Responds to Politics. Once the tide is turned, and the political winds change, more businesses respond in like manner. For example, after Barack Obama was elected president in November 2008, Wal-Mart immediately began a campaign to align itself with a new more green and liberal American consumerism.

An Encouraging Example. Sometimes seeing a big picture example can help us realize how our small personal choices collectively have a larger impact. Consider the following positive example of how individuals can influence the marketplace democracy:

Difficult Choices. The cartoon below, by Mike Adams of NaturalNews.com, illustrates the challenges facing consumers who want their purchases of products and services to reflect and support their ethics, values, goals, principles, and hopes for a better world. How would you buy if presented with the choices presented in the illustration?

The correct answer in today’s global marketplace may be to support organic farming and ethical labor practices no matter how far away you need to go to find them. Why? If consumers simply refuse to support unethical labor and environmental contamination, local vendors will have no choice but to comply. 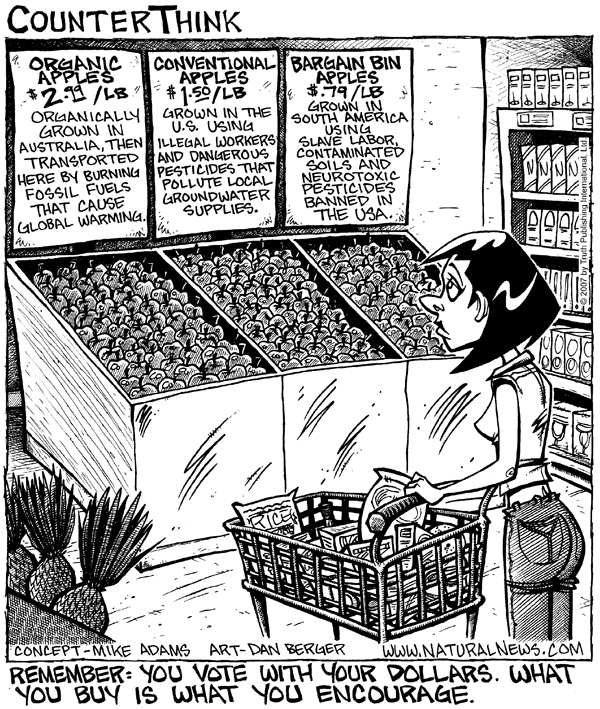 Document History. This document was first published on 20081121at1737. Four years later, on 20121126mo1423 the Anne Lappe quote was added with a graphic since it seemed to effectively convey the general message of this document.