Summary. Since January 2008, the monthly selections have been a single song per month. This month there are several songs of this genre that will be considered for the annual Heart Songs compilation.

This month’s Heart Songs selections are a few of my favorite Indian songs. The songs are listed alphabetically by album. If you have the free iTunes program, you can preview the compilation. Links to songs on this page open the iTunes program for previewing the song.

I think my favorite song from this collection is the song Tum Se Hi by Mohit Chauhan from the soundtrack to the movie Jab We Met. I really enjoyed the movie as well as the music in it.

Another song that I like comes from another movie that I really enjoyed. The song is Tujhe Dekha To from the soundtrack to the movie Dilwale Dulhania Le Jayenge (DDLJ). 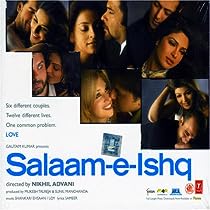 The song Dil Kya Kir has an uplifting melody and instrumental accompaniment. It is from the soundtrack to the movie Salaam-e-Ishq. This song as well as others this month have a sound that blends various genres including African rhythms, dance rhythms, and harmonious “a cappella-like” vocals.

The last song this month is Send Me On My Way by Rusted Root on their album When I Woke. The song was featured in the movie Ice Age and is part of the soundtrack to that movie but may not be included on the soundtrack CD for the movie.

I want to thank Makur for inspiring this month’s selections and helping in finding them and picking them out.