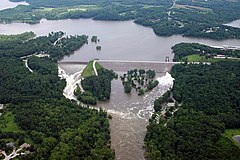 Flood Recovery. As the water level of the Iowa River is finally receding, damage assessments are being made. Much time, energy, money, and resources will be needed to restore millions of square feet that were damaged by the flood including businesses, homes, city government buildings, transportation facilities, and buildings at the University of Iowa. [Photo of Coralville Reservoir Dam courtesy of Wikipedia]. This document explores what can be done to reduce the impact of flooding. More about recovery efforts from the recent 2008 flood is on the Iowa City Flooding and Emergency Volunteer Resources page.

Climate Changes. Because global climate patters and severe weather seem to be changing, past performance is not an indicator of future results. Therefore, flooding, earthquakes, tornados, tsunamis, mud slides, thunderstorms, lighting, damaging winds, hurricanes, tidal waves, volcanos, and other destructive forces may increase in frequency and intensity in the future. What we might have in the past called a 500-year flood may in the future be referred to as a 15-year flood.

Proactive Flood Containment. Because future severe flooding is likely, some people are beginning to think in terms of preventative flood containment and disaster planning (see article by Nicholas Johnson and also State29 blog which both quote this page). I’m encouraged to see that others are thinking about widening the green areas around the Iowa River. When I was in Chicago recently (photos), we had wonderfully pleasant weather on Monday (photo) and walked in the water on the beach. The next day it was cold and dangerous to even be near the lake. Waves were crashing against the shore furiously (photo). The beach was closed. Fortunately no property was damaged. No businesses were closed down. No residents were displaced. Why? Because Chicago has established beautiful parks, beaches, and trails along the lake shore.

I think Iowa City and other communities should do the same. Putting parks and trails in an area subject to flooding doesn’t mean that parks and trails aren’t as important as businesses. The point is that they are easier to clean up after flooding. Parks aren’t “mission critical.” It wasn’t until this flood that I realized that in addition to homes how many of this city’s most expensive and important resources are in flood areas:

If the above resources were taken off-line, portions of the city may need to be evacuated. Below are some suggestions for more practical and effective utilization of low-lying urban areas subject to flooding.

Facilities Needing Large Amounts of Water. Some of the facilities listed above use large supplies of water and need to be near a water source. However, they could be built in a way that flooding would not stop their operation (see examples provided below). Or, perhaps it is possible to build pipe systems to transport water to and from facilities that need it. Certainly there are urban centers that have similar facilities without the benefit of a river or lake being close by.

Sports and Recreation Resources. Some sports require large amounts of open space (and open green space) such as tennis, golf, soccer, baseball, football practice, and other such things. Why not have these in the low lying areas. Instead, in the case of the Iowa City flood of 2008, the football practice field was high and dry while the critical infrastructure of Iowa City and the University of Iowa was under water.

Clean Flooding for Easier Cleanup. What is clean flooding? There are two aspects to flooding: (1) wetness, (2) dangerous debris. While “wetness” is nearly impossible to contain even with sandbags, it may be possible to contain dangerous debris by putting up walls of nets or a filter system causing larger objects to flow down stream. Perhaps it would be possible to have artistically designed and placed angled fins (or cement walls) directing the flow of water (and objects) back toward the middle of the river. This would allow rising waters while at the same time keeping most objects flowing down stream. Large heavy objects flowing quickly in a river can cause significant damage.

Flood Proof Buildings. In most urban centers, finding sufficient space for parking (of cars or bicycles) is a challenge. If the lowest level of buildings could be reserved for parking, flooding would simply prevent access to the building while water levels were high. Yet valuable office property would be high above the water level. This would solve the parking problem and create a building that is resistant to damage from flooding.

Water Removal Systems. For existing buildings that can’t be rebuilt from the ground up, it may be possible to install off-the-grid (gas or biofuel powered) water pumping systems capable of ejecting any and all water that might flow into the building faster than it can flow in.

Water Damage Resistant Buildings. Lower levels of buildings could be remodeled to be water resilient by having carpeting removed (using polished cement instead) as well as any furniture or objects that may be susceptible to water damage. Walls could be sealed and covered with tile or a similar waterproof material.

Additional Reading. Below are links to resources and other readings on this topic.

Responding to Criticism. One person, who goes by the online name of American007, criticized the above article saying that I should “get the facts straight.” My response to their five points is found below. Rather than reprint the entirety of what they said, I’ve simply paraphrased the main points in quotes. Their full comments are available following Nicholas Johnson’s blog writing on this topic.